Kim Kardashian Adds 2 New Puppies to Her Family, and We Love North's Names For Them 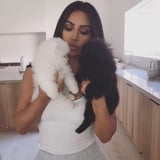 The Kardashian-West crew got a little bit bigger this week, as Kim Kardashian added two Pomeranian puppies to the mix. On Friday, the reality TV star introduced her adorable black and white dogs on Instagram, with a request that fans help pick out their names.

"Meet our new babies! We just need names! North came up with names that go with our other Pomeranian Sushi," Kim wrote in the caption. "She wants white baby girl to be named Saké and the black baby boy either Soba (Noodle) or Soy Sauce."

Some of Kim's fans were surprised to see her add more pets to her family after the death of North's hamster, Blacktail West, earlier this year. Kim struggled with telling her kids about the hamster's death, and later vented to her sister Khloé Kardashian. "This is the kind of sh*t I can't deal with," she said. "This is why you don't get someone a pet."

Hopefully, time has healed those wounds and Kim's family can find joy with their newest additions. I mean, who can deny the cuteness of these fluffy faces once you see them?

New York proposes to crack down on private ownership of capuchin monkeys, arctic foxes, raccoons, skunks and other wildlife

This Impatient Cat "Boops" Her Parents Awake Every Morning, 'Cause Who Needs an Alarm?

White Tigers - The Truth In 3D