Ellen DeGeneres Adopted a New Puppy, and We’re Obsessed With Her Name! 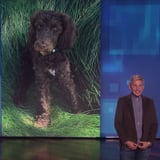 Ellen DeGeneres has a new puppy! The talk show host announced that she and wife Portia de Rossi adopted a rescue 3-month-old Poodle named Mrs. Wallis Browning, and her excitement over her family's new addition is palpable.

"I'm so excited, I can't even tell you how excited I am, and I'm talking fast because I'm excited; because I want to tell you something exciting," Ellen said in the beginning of the segment. "So we rescued a puppy. She's brand new - that's what puppy means. We got her from a wonderful rescue place, it's called Wagmor."

Related:
I Can’t Decide Who’s Cuter - This Toddler Talking to Her Dog or Her Dog Who’s Talking Right Back

When she first shared the clip of the segment on Sept. 16, she teased her fans by saying she was going to show a photo of Mrs. Wallis Browning, but cut off the Instagram video before we could get a peek. On her Sept. 17 show, however, the adorable pup's photo was finally revealed, and oh my goodness, she's so cute!

"She's tiny! Her name is Mrs. Wallis Browning. Or Wallis, or Wally, but Mrs. Wallis Whitmore Browning is her maiden name . . . She's very adorable and pretty and precious, and she knows it. This is this morning, looking in the mirror at herself," Ellen said, as a photo of the pup in the mirror pops up on the screen.

"Wallis is 3 months old and she unfortunately was with some irresponsible people - she was kept in a cage outside in the desert since she was 2 months old, just on the ground in a cage," Ellen shared. "So she was never able to run, she never had a toy, she never wagged her tail, she never lived next door to Oprah - it's all changed! It's all different now."

Apparently, one of Ellen's other dogs, Kid, isn't a huge fan of Wallis just yet, as evidenced by a video she shared in the above clip, but we have a feeling they'll warm up to each other soon - how could they not?! We are so excited for Ellen and Portia and can't wait to see more of Mrs. Wallis Browning soon!