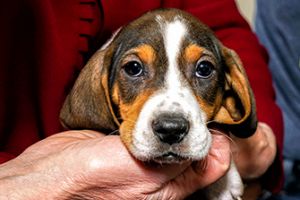 According to The National Coalition Against Domestic Violence, one in four American women and one in nine men experience severe physical violence from an intimate partner in their lifetime. Many of these survivors courageously leave home and find safety in area shelters, but that decision becomes much more difficult and complicated when pets are involved.

The harrowing stories these survivors share often include details of pets being killed or tortured in retaliation, of abusive spouses and partners using pets as leverage to keep them from leaving, and of housing challenges that make it impossible to bring along a beloved family pet.

Housing obstacles for domestic violence survivors are particularly daunting. Most emergency housing options do not accommodate pets, and boarding a pet in a public facility can be prohibitively expensive. Meanwhile, permanent housing often requires pet deposits and other fees that may make that opportunity unfeasible.

Recognizing that no one should have to choose between leaving an abusive situation and ensuring a pet’s safety, California legislators have passed A.B. 415, which the ASPCA helped develop and support in collaboration with the California Partnership to End Domestic Violence. Introduced by Assemblymember Brian Maienschein, this groundbreaking legislation will make emergency and permanent housing support for domestic violence survivors and their pets accessible by reimbursing pet boarding costs through the California Victim Compensation Board.

We rely on our pets for comfort and support, and they depend on us for the same, so any crisis that separates people from their animals is one we should address decisively. That’s why we urge Gov. Newsom to sign A.B. 415 immediately. This law will enable domestic violence victims to leave abusive environments without fearing for their cherished pets and eventually enjoy new and safer lives alongside them.

As we recognize Domestic Violence Awareness Month during October, we must use our voices to speak up for the most vulnerable among us. Visit the ASPCA Advocacy Center to quickly contact Governor Newsom and ask him to sign this humane bill into law to protect human and animal victims of violence.

My Day Is 100% Better After Watching This Beagle Play Piano (and Sing!) For a Dancing Baby

Activists From Around the Globe Are Marching to Save the World